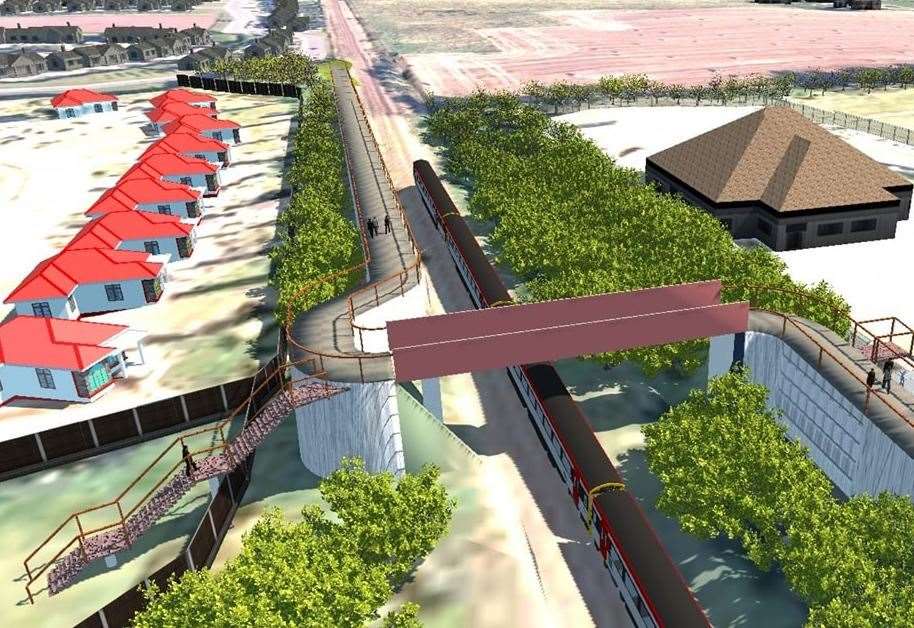 Designs have been revealed for a new walkway between a housing estate in Nairn and an industrial area and business park.

Three options have been developed by the Highland Council, but no firm price tag has been attached.

And while the pedestrian and bicycle link across the Inverness-Aberdeen rail line – which connects Lochloy and Balmakeith – has so far been widely welcomed, a community leader would be keen to see alternatives.

Hamish Bain, president of the Nairn River Community Council, believes “all options” should be on the table, including a “more ambitious” bridge that allows vehicle access to relieve traffic congestion in Nairn au Lochloy / Merryton junction with the A96.

The Highland Council has been criticized for allowing the construction of 1,000 properties in Lochloy over the past two decades without any vehicular access directly to the A96.

Instead, traffic must access the national road via Lochloy Road at the traffic lights, creating a bottleneck.

â€œIf the crossing goes as proposed here as an ‘active displacement’ link, it will have to meet the needs of all who want to use it,â€ he said.

â€œWe are also seeing calls today on social media from local residents for a second road to connect the Lochloy estate across the railroad with the A96 east of Nairn. Perhaps there is an opportunity to solve several problems at once by considering a more ambitious “level crossing” which connects Lochloy more directly to the A96 and the retail park by car, via Balmakeith or more to east, while also allowing “active travel” for walkers. and cyclists, by improving safe routes to schools, by integrating correctly with the next A96 ring road.

“As there is only one chance of making this pass for Nairn and it will be largely funded [via developer contributions] by locals who have bought houses in Lochloy – we expect ‘all options’ to be on the table when the public consultation takes place.

He stressed that he welcomed safer and more accessible active travel routes in Nairn to reduce â€œcar addictionâ€.

Sheena Baker, President of the Nairn West Suburban Community Council, said: â€œThere are complex issues to consider here, not just for those who will want to use the crossing and those who live nearby, but for a larger infrastructure to East Nairn and Nairnshire.

While the crossing is well received by many on social media, residents near where the crossing would be have reportedly voiced concerns that it overlooks the properties.

Steven Grant, Project Engineer for Highland Council, said: â€œThe route was identified in the Inner Moray Firth local plan and recognized the need for a convenient link for active travel to the business park.

â€œThere are a number of significant design issues to overcome to provide such a facility, but the main hurdles are the bridging of the main track and the provision of compliant ramp facilities for cyclists, wheelchair users. and people pushing strollers etc.

â€œThe project is funded by the Highland Council, through developer contributions, and Transport Scotland, through Sustrans and their Places for Everyone funding stream.

â€œA number of design considerations, including an underpass and elevators, were also taken into account, but excluded in terms of ground conditions, utility conflicts, maintenance and public safety / security. “

He added, â€œThis consultation exercise involves looking at three concepts and the public’s views. The designs are currently in the design stage, which means that they have been produced and meet the design criteria, but are at a stage where only the design principles are defined. Design appearance, finishes and exact dimensions / location may change to accommodate future design comments, concerns and issues.

“As with most projects of this type, it will require a planning agreement and at this point we will seek further consultation / comment on a more refined design.”