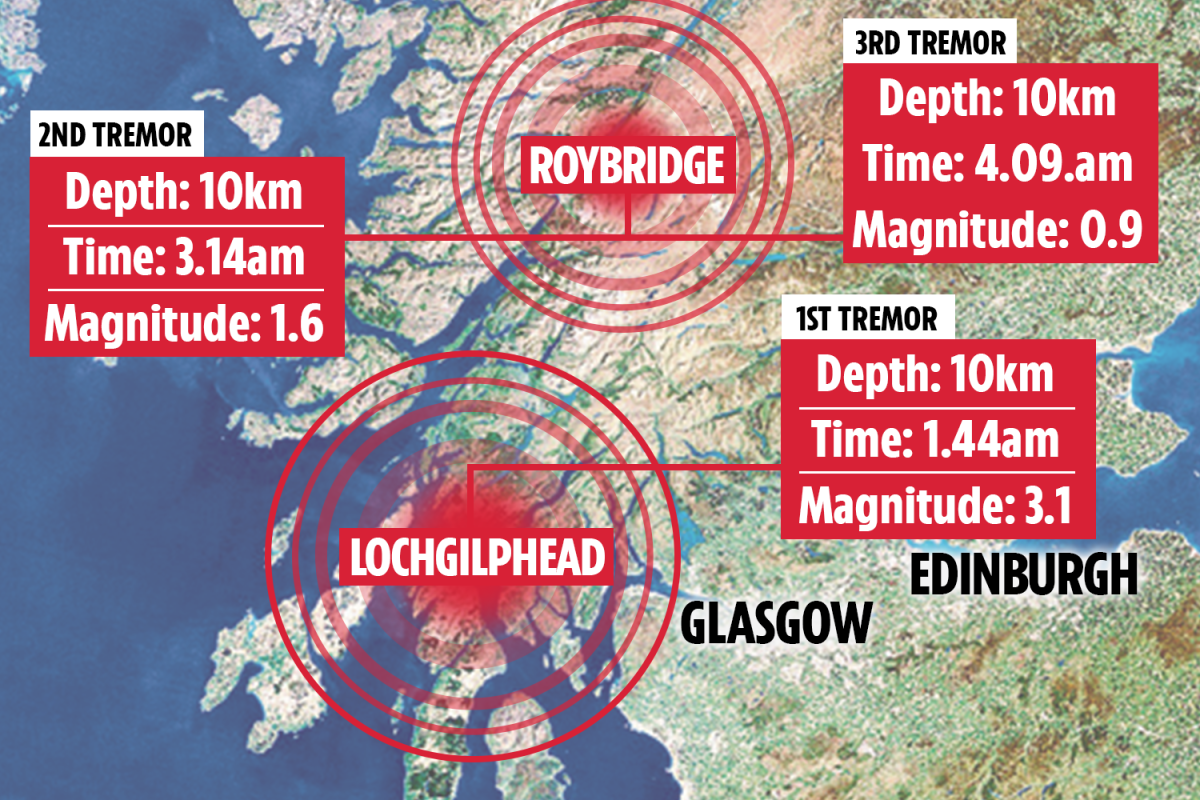 SCOTLAND was rocked by a flurry of earthquakes this morning as residents fear there has been a major explosion.

Three tremors were recorded on Scottish soil from a little before 2 a.m. to shortly after 4 a.m.

Houses shook in and around Lochgilphead, Argyllshire, with tremors measuring 3.1 on the Richter scale.

The epicenter of the earthquake was recorded in the sea between the Isle of Jura and the mainland shortly before 2 a.m. today.

A second thrill was felt an hour later 90 miles in the village of Roybridge, Inverness-shire, measuring 1.6.

The earthquakes could have been felt as far south as the central belt and even across the sea in Northern Ireland.

Terrified locals spoke of how worried they were about an explosion.

â€œWhat I felt was like a big massive explosion or a truck hitting our building. The whole building shook for five or six seconds.

â€œI ran to check the kitchen and make sure everything was okay. I had no idea what was going on.

â€œI had a packed house with quests and just wanted to make sure everything was okay. I then checked social media and found out that it was an earthquake.

Stan Craig, 74, owner of the city’s Stag Hotel, said he was awakened by the explosion.

He said: â€œIt was a huge growl and noise. At that time, we didn’t know what it was.

“Nothing fell off the shelves or anything like that.”

Victoria Winters, 53, felt the earthquake in her house “like a freight train”, waking her and her husband John, 73.

The couple live in a secluded old stone farmhouse in a valley off Loch Fyne, near Minard, Argyllshire.

Victoria, a management consultant and vice-president of the Heart of Argyll tourist board, believes she is particularly susceptible to tremors.

She said: â€œWe were woken up with a bit of a start. It looks like a freight train that suddenly appears and then it starts to shake.

â€œLooks like something really big is rushing towards you. It’s not the first time I’ve experienced one here, so I knew what it was.

“I can imagine if you hadn’t experienced it before it could be pretty scary.”

The quake could also be felt as far south as Lanarkshire.

More than 30 people have reported to the United States Geological Survey that they have felt the quake, with reports coming from as far away as Edinburgh and Ballycastle in Northern Ireland.

No structural damage has been reported, with earthquakes typically having to register 5.5 on the Richter scale to cause damage.

The agency said the quake occurred 10 km below the Earth’s surface.

Data from the British Geological Survey show that between 200 and 300 earthquakes are detected in the UK each year, with tremors of magnitude between 3.0 and 3.9 occurring on the continent once every three years on average.

The largest earthquake on record in Scotland struck in November 1880 when a 5.2 ML earthquake was recorded in Argyll. It has been felt as far away as Perthshire.

In August 1816, an earthquake shook Scotland from the Pentland Firth coast in the north to Coldstream in the Borders, damaging the steeple of the town of Inverness with a local magnitude of 5.1.

And in August 1974, a 4.4ml earthquake, with its epicenter at Kintail in the North West Highlands, was recorded as the largest in a series of 20 seismic events to hit the region.

Scottish police said they “received a report of a possible explosion and earthquakes” in the village of Tarbert around 2 a.m.

A spokeswoman added: â€œFollowing investigations, it was confirmed that an earthquake had occurred in the Lochilphead area.

“There are no reports of damage to property or utilities.”

The latest tremors in the UK come a month after an earthquake was felt in North Wales.

Residents of Snowdonia heard a “big rumble” on Sunday, confirmed to be a mini earthquake of 1.0 on the Richter scale.

It was recorded at a depth of 6 km with the epicenter given as “3 km north-northeast of the village of Dolgarrog, Conwy”.