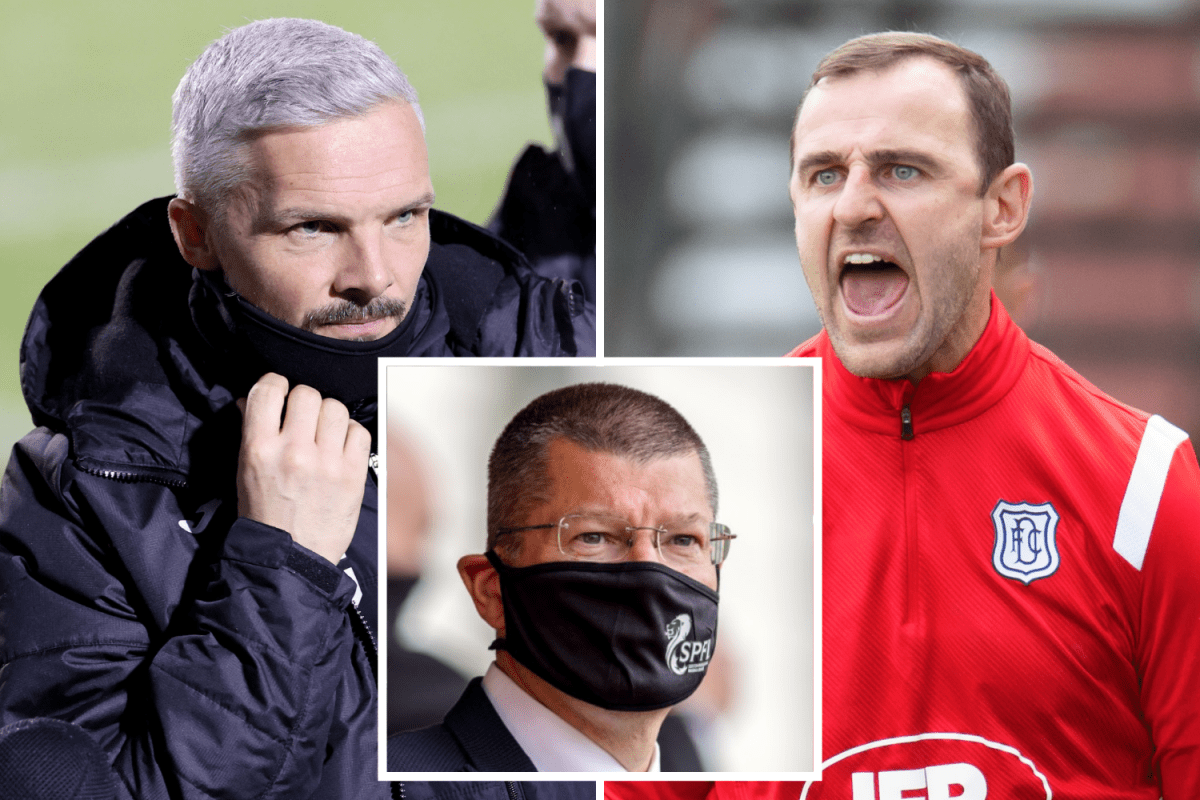 DAVE MACKAY is 40 years, 239 days old and has not kicked a ball for five years due to a hip depression.

Still, the Dundee assistant manager was forced to re-register as a player so he could sit on the bench for a crucial game at Aberdeen.

Welcome to the SPFL, sports enthusiasts.

Initials that should really represent the Sunday Parks Football League – because that’s what our supposedly professional organization was reduced to last week.

A collection of clubs scrambling to find inexperienced kids and dumb veterans to make up the numbers, just like decades of pubs ravaged by regulars testing positive for hangovers.

And why? Because the people running the show are about as capable of thinking together about jumping the Grand Canyon on a skateboard as I am.

At a time when the Scottish government was in blind panic over a variant of Covid no more dangerous than a half-decent cold, Neil Doncaster and his cohorts had a responsibility – looking after the football community of a way our political leaders were incapable of. To do.

On this point, they have failed miserably. Pathetically. Spectacularly. But above all, in a completely predictable way. They should have had the guts to call the Premiership winter break as soon as those fools at Holyrood announced that crowds would be capped at 500 from yesterday.

Instead, not only did they laugh at him by only advancing him 24 hours – big wowee! – they did not call Nicola Sturgeon for the mind-boggling decision that full halls would still be allowed for all three games last Wednesday.

How could that be? How could a virus be deemed safe enough for now, but at the same time too dangerous in four days?

How could a credible governing body stand up for something so stupid?

I think we all know the answer to that question.

It happens because, when the good of the game is at stake, that is always the way it is.

This is why we really shouldn’t be surprised, although anyone who believes in the legendary concept of sporting integrity has every right to be shocked and dismayed at St Mirren’s order to complete his home game against Celtic despite the fact that it is only half of it. dozen of weaners from primary school and four caretakers.

That’s why – although we may rub our eyes at the sight of Mackay’s name on a list of four submarines from Dundee to Pittodrie – we then take the news and shrug, “Yes, that’s the one. kind of thing these muppets would do. “

Like my lot, the Dark Blues have requested a postponement to be told to suck it off, making you wonder how Doncaster and Co works when Covid IS just too much to deal with.

Me? I guess they throw the names of all the clubs involved in a bag and remove the lucky ones who have a day off. With a substantially oiled Rod Stewart doing the toss.

“Inverness Caley Thistle… Game off. Clyde… Away and lie back in your Bovril…”

No offense to Aberdeen, but this eeny-meeny-miny-mo level of management prompted me to encourage Dundee to get a result yesterday, preferably with Mackay coming in at the last minute to equalize his questionable hip.

And that’s, shamelessly, why I was even more ridiculously proud of St Mirren for pulling this 0-0 against Celtic with the help of a group of teenagers brought back from Lowland League loans than if we had released a full force aside. Every tackle, every release, every save was like two fingers to the SPFL for getting us through the ordeal, just like they put us in three games in a week last season – one of those against Celtic too – When the three guards were isolating.

Surely the league owes a greater duty of care to its member clubs than that? After all, if any of those clubs CHOOSE to put seven or eight key men to rest and replace them with rookies, they would face a fine for boosting the spirit of the game where it hurts.

How come the same doesn’t apply the other way around? How come Doncaster is forcing clubs to pick retired assistant managers and after bedtime kids isn’t against the rules?

Again, the answer is as simple as it is depressing.

This is because they make up the rules as they go. They don’t know any other way to exist, they don’t have a plan that goes beyond the tip of their nose.

I wrote before the start of this season that only the purged buffoons could neglect to put in place a plan of what would happen if we were faced with a return of the pandemic.

Only blazers with a death wish could take the amount of abuse they suffered during Covid and not make sure no one could cane them next time around.

Yet here they are, still blundering from calamity to disaster with the memory span of a goldfish.

Still as reluctant as they are unable to make any major decision that comes close to being generally accepted as the best available under the circumstances.

That’s all we’re looking for – not perfection, nothing revolutionary, just a way of working that doesn’t make you want to break your head out of a brick wall.

The fact that this seems to ask too much is probably the biggest indictment that can be leveled against those who run the FPSL.

Put it like this. When they finally dump Boris Johnson of Downing Street as the last of the Christmas trifles, he will have his CV straight up to the sixth floor in Hampden to try and bring some gravity and stability to our national sport.

THERE must be some St Johnstone fans wondering if these two cup wins are actually booster jag hallucinations.

That’s how surreal the miracle of their double triumph at Hampden last season seems right now.

At the bottom of the table, eight consecutive defeats, hardly creating a chance. The rate at which something so amazing has turned so sour is quite frightening.

Packed a flash of excitement – the fleeing cross, shining header leaving the keeper in a heap – and yesterday’s 3-1 home loss to Celtic pretty much summed up their season.

Don’t make lots of mistakes, don’t look disorganized, no signs that no one is playing to screw it up.

Correct . . . well, just sort of empty, sort of nothing. Even when Chris Kane’s exceptional finish brought them down to 2-1, there never was a feeling they were close to making a real comeback.

When did they then lose a third? Sad to say, it seemed and seemed like everyone around McDiarmid had somehow accepted his fate.

And when a team and its supporters are in this zone, it is sometimes even more worrying than if they all take each other by the throat, because at least there we know that the passion is still brewing.

From the outside, we don’t feel this passion. Everything seems a little soft, as if some people are making movements.

All Callum Davidson can hope for is the support of the board to give a struggling team the injection of pace, desire and creativity that they are so clearly lacking right now.

Oh, and PS – it would probably help if they also had some grass to play on rather than the bare, floating spud patch that they are forced to go through.

DESMOND TUTU has dedicated his life to making the world happier.

He helped bring down apartheid in his native South Africa, mediated between rival black factions for power, defended the use of words rather than war, fought for women become priests and for the rights of homosexuals to be accepted worldwide.

So who would have thought that for a generation of wheelchair football fans it would be better known as rhyming slang for a game where four goals are equally shared?

We may never know if the Nobel Peace Prize-winning clergyman was aware of this strange little distinction. But somehow you feel like if he was, he would have had his infamous smile and nodded in approval.

So how about, out of respect, not to mention a Desmond until the big man is buried – before keeping his name forever whenever he goes 2-2.

After all, it just wouldn’t be the same if Merse were to tell Jeff that now was the ballerina’s skirt. . .