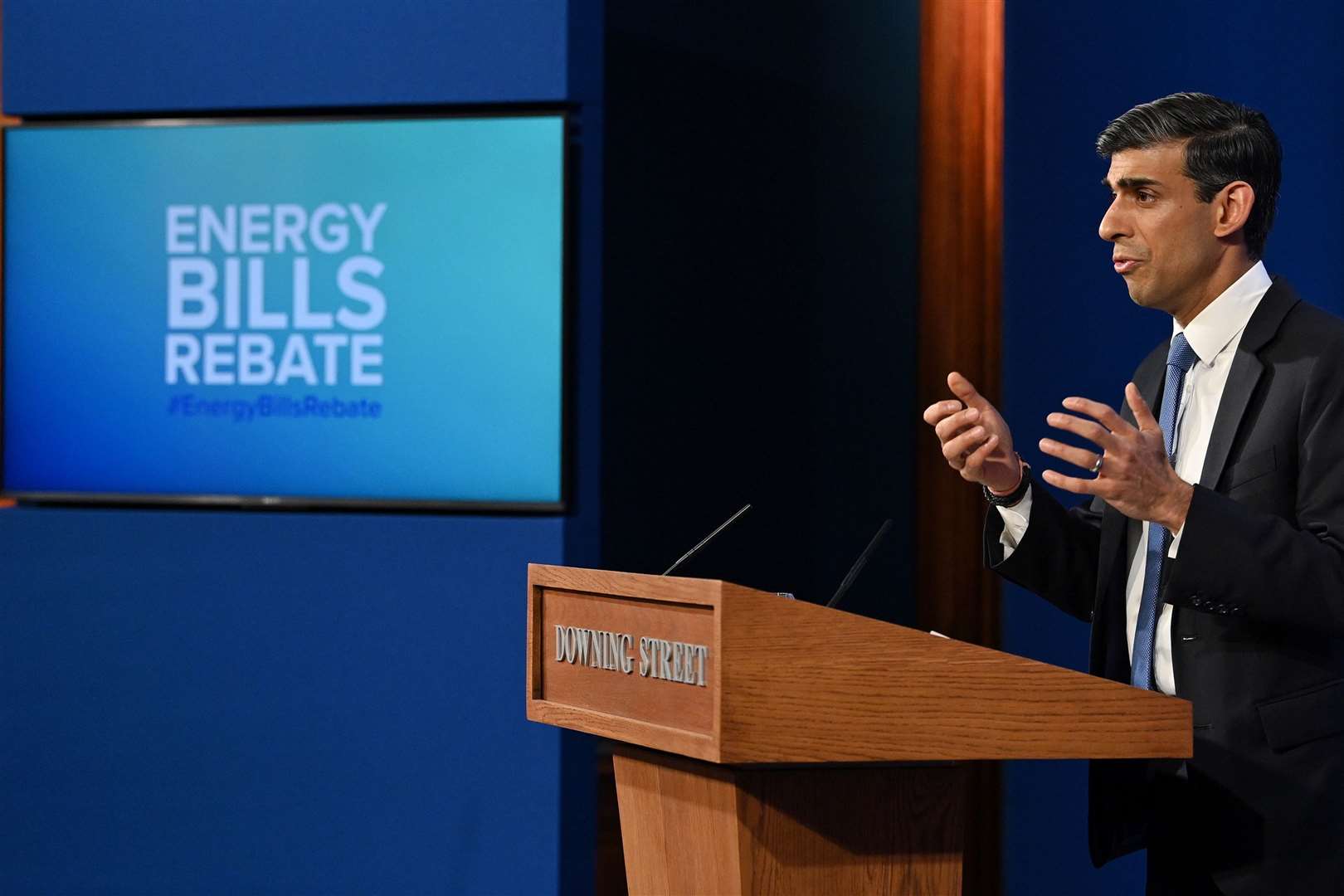 The Chancellor said he ‘has no crystal ball’ and warned households they will have to adapt to rising energy prices in the future after stepping in to partially offset a rise nearly £700 in energy bills.

It came as the cost of living crisis was laid bare on Thursday by soaring energy costs, while the Bank of England also warned that inflation would peak in more than three decades.

Rishi Sunak has announced a £9billion package, including a one-time refundable £200 rebate and refund on council tax bills, designed to ‘mitigate’ rising bills.

Energy bills are expected to soar by 54% for 22 million households from the start of April, adding £693 to the annual bills of a typical household, regulators confirmed earlier on Thursday.

The Chancellor said there could be a further rise in prices later in the year due to an “unpredictable” energy market.

“There are global forces at play here that are driving up gasoline prices right now and I don’t have a crystal ball,” he said.

“Current energy markets are forecasting prices to rise further in October before falling quite significantly next spring, but again, I don’t have a crystal ball and these things are uncertain.

“Rising energy prices are something we will have to adjust to, like other countries around the world and it would be wrong to pretend otherwise, but what we can do is slow down that adjustment for the make it more manageable for household budgets.”

Mr Sunak also told a Downing Street press conference that energy price rises are “so significant” that they will hit middle-income households as well as the poorest families.

Meanwhile, inflation is expected to reach 7.25% in April, according to new forecasts from the Bank of England released on Thursday.

The prediction would mean disposable income would fall by around 2%, the Bank estimates, the worst impact since records began in 1990.

The squeeze comes as oil giant Shell revealed a 14-fold increase in profits as the company benefited from soaring global prices.

Rate setters at the Bank of England raised the base interest rate from 0.25% to 0.5%, a move it hopes will provide relief to households.

He announced a £200 rebate on energy bills, which will have to be repaid.

The Chancellor also revealed a £150 council tax cut for millions in England, which will not have to be repaid, and £144 million to councils to support vulnerable households.

He hopes it can offset some of the £693 a year that energy regulator Ofgem added to bills for millions from April 1.

The regulator was forced to raise the energy price cap to a record £1,971 for a typical household on a standard tariff as gas prices soared to all-time highs.

For customers with prepaid meters, the price cap will increase from £708 to £2,017, the regulator added.

The ceiling price is set per unit of energy used with the increase calculated on the basis of a household using a “typical” amount of energy. Households that consume more will pay more.

Details of the Chancellor’s £200 rebate will be worked out following consultation, but households will have to repay the money with bill hikes of £40 a year over the next five years from 2023.

Ministers hope wholesale energy prices will come down so households can pay off what they owe without a big rise in bills.

Some energy company insiders worry that, while sound in principle, the policy is too dependent on lower global gas prices, as investment bank Goldman Sachs previously warned prices would likely remain at twice their usual levels until ‘in 2025.

Mr Sunak’s £150 council tax rebate will cover homes in Bands A to D, affecting 80 per cent of households in England, he said.

“The price cap means that the impact of soaring gas prices has so far mainly been felt on energy companies,” he told MPs on Thursday.

“So much so that some suppliers who could not afford these additional costs had to go bankrupt.

“It is unsustainable to keep the price of energy artificially low.

“For me to stay here and pretend that we don’t have to adapt to pay higher prices would be wrong and dishonest.

“But what we can do is soften the effects of a large price shock for millions of families by ensuring that the price increase is initially smaller and spreads out over a longer period. “

In the Commons, some MPs questioned whether oil companies like Shell should be hit with a windfall tax, after the company revealed huge profits.

Labor’s Nick Smith said: “Does he (the Chancellor) really think Shell’s $20bn super profits are untouchable? His non-interventionist approach will not convince many people across our country.

Shadow Chancellor Rachel Reeves said millions of people were cutting spending to pay their bills, adding: “What is the government proposing? A “buy now, pay later” program that increases costs for tomorrow.

“The best way to target aid to those most in need would be an increase to £400 and an extension to 9 million households of the warm homes discount, as Labor proposed today . Their regime is now a pale imitation of that of Labour, especially for households and pensioners with the lowest incomes,” she added.

The price cap increase includes a charge of £68 per household to cover the costs of protecting millions of customers whose energy suppliers have collapsed in recent months.

Ofgem had worked out a way to spread this charge over a longer period, but abandoned the plan when it learned of the government’s action.

“It made no sense to run a private funding scheme on top of that,” said Ofgem chief executive Jonathan Brearley.

The government has been assessing for weeks what it can do to help customers. Potential solutions have included loans to energy companies and reductions in VAT or levies on energy bills.

Ofgem also plans on Friday to set new rules that will allow it to change the energy price cap between its regular six-monthly reviews.

The regulator has promised that the power will only be used in exceptional circumstances and that five tests will have to be passed before it can intervene.

The price cap had already been set at a record high in October before the worst of the gas price spike was seen in the market.

There are also concerns for next winter, when experts predict bills could reach £2,329.