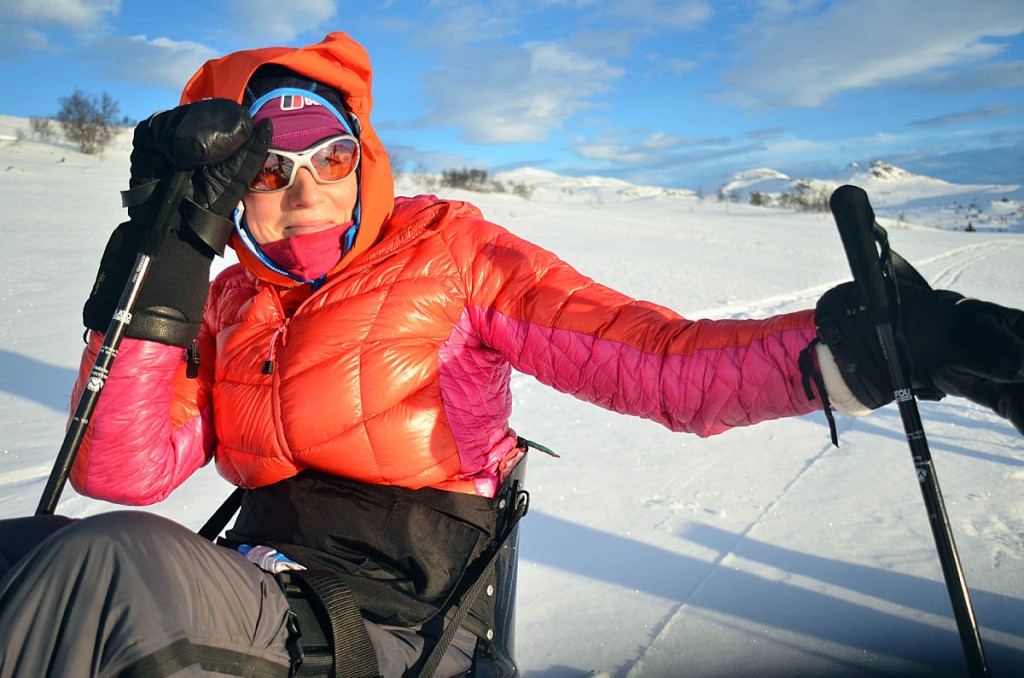 Bob SmithEditor
Sunday 13 February 2022 21:31 GMT
No further updates have been made

The Inverness-based Paralympian has been named the 15th recipient of the Scottish Award for Excellence in Mountain Culture.

Early in her sporting career, she climbed Mont Blanc and the Matterhorn in 1991, and won the KIMM Swiss Mountain Marathon a year later.

But at the age of 21, an accident while climbing a cliff left her paralyzed from the chest down.

At 21, Darke woke up from a coma to be told she would never walk, bike or climb again.

Organizers of the award said: “With unwavering spirit, will and confidence, the first thing she bought after six months recovering in a hospital bed was a racing chair.

“A year later she completed the Great North Run followed by the London Marathon. In 1996, she crossed the Himalayas on a handbike from Kazakhstan to Pakistan while adapting to paralysis, through the Indian Himalayas in 2005 and 2018, and across the Tibetan Plateau in 2014 .

“In 2002, she was part of a team that sea kayaked the Inside Passage from Canada to Alaska, from Vancouver to Juneau, in 10 weeks. In 2006, she took part in an expedition that crossed the Greenland Ice Cap while sitting on skis using her arms and poles to cover the 372-mile crossing.

“Sixteen years after her accident, Karen climbed El Capitan in Yosemite National Park in California, a four-day climb that required 4,000 pull-ups. More recently Karen has cycled across seven continents following rivers and coastlines and explored ‘inner gold’ as the concept behind a book she is working on. »

Karen Darke said: “Receiving the Scottish Award for Excellence in Mountain Culture took me by surprise, but it is a real honour. Thank you.

“My soul is seldom peaceful without a mountain in its presence. When becoming paralyzed almost 30 years ago, it first seemed like the mountains were a thing of the past. Thanks to the interesting technology of bicycles and skis, and to great friends who have been up for a few adventures, the mountain landscapes have worked their way even deeper into the fabric of my being.The spirit of adventure that the mountains have taught me is the inspiration for my next book, which I hope will connect others more deeply to the power of the wild landscapes around us.

Named by the public and her peers as a mountain hero who celebrates success, accomplishment and the spirit of adventure, Karen Darke joins previous winners including Dave Morris, Andy Nisbet, Jimmy Marshall, Myrtle Simpson, Ian Sykes and Dr. Hamish MacInnes in Excellence in the Mountain Culture Hall of Fame.

Currently, Darke is training for the ninth and final stage of her Quest 79 project, to create the Pole of Possibility, in sit-skiing with teammate Iona Somerville, a graduate of Scottish charity Polar Academy, who works with teenagers often weak. in belief and aspiration.

The duo will begin their exploration at 79 degrees latitude with the aim of creating a world and Guinness record for sit-skiing to the South Pole. Their mission is to explore and share the benefits of adversity. They will explore how adversity, nature and adventure help us heal from difficult life events and empower our individual and collective capacity to do more than we believe possible.

Alvance Aluminum and Jahama Highland Estates are supporting the price. Alvance British Aluminium, Managing Director Tom Uppington, said: “Karen is the most worthy winner we can imagine of this award and an exceptional addition to the list of previous recipients. Karen’s resourcefulness, strength of character and mountain expertise are extraordinary and show qualities that we can all aspire to in our daily lives.

Karen Darke will speak at the Fort William Mountain Festival as part of the Bike Night at the Highland Cinema, Fort William on Saturday 19th February.

The 17-year-old, who was chosen to represent Britain at the Beijing Winter Olympics, is the eighth recipient of the Scottish Youth Award for Excellence in Mountain Culture.

The organizers of the awards said: “Described as a ‘one-in-a-generation athlete’ by former Olympic snowboarder Lesley McKenna, and touted as a strong British contender for the Beijing Games, Kirsty Muir perfectly embodies these winning principles.

“His extraordinary rise to the top of the international freestyle skiing circuit, whether it was hurtling down the dry slopes of Aberdeen Winter Sports Center at the age of ‘nearly four, to beginning to hone her art of freestyle at age seven, multiple podiums in youth competitions and a memorable young girl The Slopestyle World Cup medal in Aspen, Colorado at age 16, can be attributed to her courage, passion, training , his focus, his determination to succeed and his humility.

Kirsty Muir said: “I am honored to be this year’s recipient of the Scottish Youth Award for Excellence in Mountain Culture. I hope I can inspire people to get out in their area and try the sport.

After winning a number of Under 2 titles at the UK Indoor Ski & Snowboard Championships and UK Championships, Muir made the senior ranks rise and shine at the Brits 2018.

The 13-year-old won all three freeski titles – big air, slopestyle and halfpipe – against competitors several years her senior. She went on to receive the “Spirit of Sarah” scholarship from Momentum Camps and the Sarah Burke Foundation, becoming the first athlete outside of North America to win the award, which included attendance at their freestyle camp. summer in Whistler.

In 2019, she made it to the podium on the international circuit by taking first place in her first European Cup slopestyle competition, continuing a successful season with second and third place finishes at the World Junior Championships in Sweden.

The biggest breakthrough in Muir’s career was when she won a silver medal in the Big Air freeski competition at the 2020 Winter Youth Olympics in Lausanne, Switzerland. Having also finished fourth in the slopestyle competition, she was chosen as Team GB’s flag bearer for the closing ceremony.

In March 2021, on his first trip to America, Muir won his first World Cup medal with a silver medal in the slopestyle ski competition in Aspen. At 16, she was the youngest participant in the final in what was only her fourth World Cup start.

She followed that up with an impressive sixth place at the FIS Freestyle Skiing and Snowboarding World Championships, also held in Aspen. Muir was the only British woman to qualify for the eight-woman slopestyle final.

Lydia Rohmer, Director and Managing Director of award sponsor West Highland College UHI, said: “We are delighted that this year’s winner is clearly a young person with a passion for achieving her dreams.

“Kirsty is committed and determined to overcome any challenge that comes her way to reach the top of her sport. These qualities of resilience and determination are what we strive to instill in all of our students along with a strong desire to share their knowledge and expertise by teaching others and we clearly see these qualities in Kirsty too.

“We would like to extend our congratulations to Kirsty and wish her every success in her future career.”