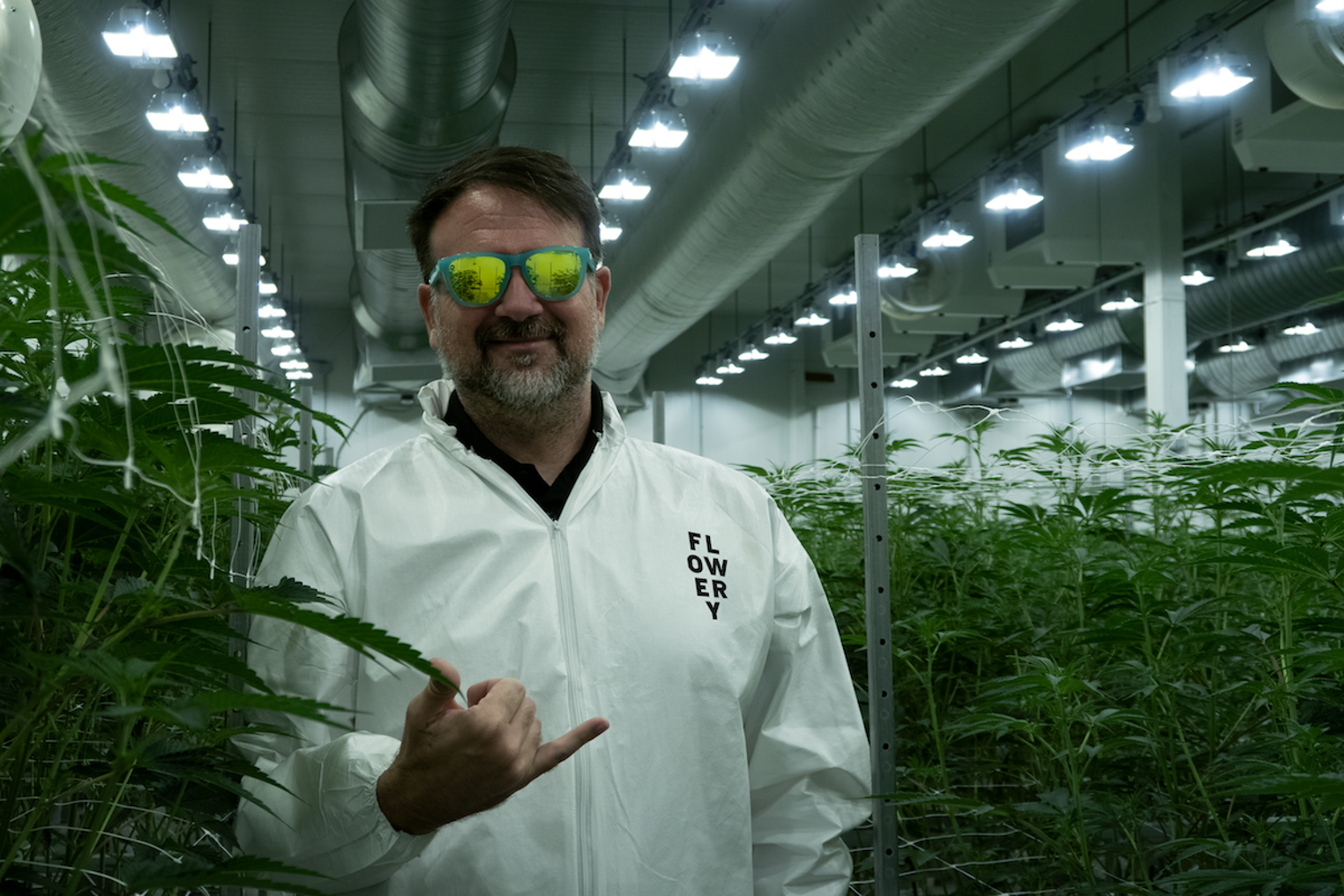 Nestled amid the rolling farmland of Homestead, the heart of Miami’s thriving cannabis growing scene, is a massive facility where, at any one time, approximately 20,000 marijuana plants are growing. Think Willy Wonka’s factory, only with weed.

The approximately 100,000 square foot building houses nearly 30 cannabis propagation and grow rooms of various sizes, as well as a few areas dedicated to extractions, hash processing, and packaging. The facility is run by Flowery, a family-owned medical marijuana company in Miami.

The Flowery is one of 22 vertically integrated medical marijuana operators in Florida, which means it handles all aspects of the cannabis process, from seed to sale, as required by the vertical integration rule of the state. Like new times previously reported, this law has often led to the formation of cannabis oligopolies, in which a small number of large corporations control the cannabis market and leave little room for smaller companies.

That’s why the Flowery has won accolades in Florida. Although the small business has grown rapidly over the past few years – from a single employee to around 60, and from a 6,000 square foot indoor climate-controlled facility to more than 15 times that size – it has managed to keep his roots in mind. The company continues to hand-deliver products including marijuana flower, pre-rolls and kief to patients’ homes across the state, from northeast Florida to the Keys. The company prides itself on producing high quality products locally and not relying on support from large corporations.

But as the years have passed and cannabis giants like Trulieve and Surterra Wellness have expanded across the state, a number of CBD and medical marijuana companies in South Florida have bowed to pressure. businesses or have closed. Over the past two years, at least four small businesses in Miami-Dade and Broward –– Lav CBD, HempXtra, Green Treets CBD and Dr. Stern’s CBD –– have closed. During this time, Trulieve grew from three to 12 dispensaries, Curaleaf from one to seven dispensaries, and Liberty Health Sciences from one to five dispensaries.

“If he could have used medical marijuana, we think we would still have him here today.”

In order to compete with the major players in Florida’s multi-billion dollar cannabis industry, the Flowery began to stray from its small-scale roots. Over the past few months, the company has hired at least 40 new employees, moved to a larger grow facility to manage its operations, and hired a handful of top industry executives — all of whom previously oversaw the company’s operations. cannabis company One Plant, sold last year to Cresco Labs for $213 million.

In a recent interview, Flowery’s new COO, Mike Smuts, and Chief Innovation Officer, Matti Marshak, told new times that although the company is growing at a rapid pace – there are plans to open four new clinics and hire 100 more staff in the coming years – it is focused on preserving what Smuts calls its “family atmosphere “.

“We are really growing in terms of organization,” says Smuts.

Flowery’s business office is located in a converted warehouse on NW 24th Street in Miami’s Wynwood neighborhood that features a mural of a flamingo painted on its storefront. It’s there that new times met Sabina Osman, the company’s sales and marketing coordinator and its very first employee.

Until 2016, when Floridians voted to legalize medical cannabis, state law required medical marijuana growers to have at least 30 years of experience in the nursery industry. So the Flowery teamed up with former Virginia Gardens police chief Steve Garrison, owner of Bill’s Nursery, a longtime almond farm in Homestead, to launch his operation.

Garrison had been inspired to break into the medical marijuana industry after his son Matthew suffered a brain injury during the war in Iraq. In January 2017, while Garrison persisted in his years-long effort to obtain a state license to grow medical marijuana, his son died from an overdose of his sleeping pills. (The cause of death was ruled heart failure.) When the state failed to issue ten new container grow licenses by October 2017, as it had promised, Bill’s Nursery sued in justice in federal court. Garrisons have long maintained that medical cannabis could have helped their son.

“The VA [U.S. Department of Veterans Affairs] stuffed him with pharmaceuticals,” Steve Garrison said. new times. “If he could have used medical marijuana, we think we would still have him here today.”

Finally, in 2019, the family was licensed by the Florida Medical Marijuana Treatment Center through a settlement agreement. Osman recalls receiving news of the approved license on April 19, 2019 – just hours away from the 4/20 celebrations.

“They [state officials] laughed at us,” she jokes.

The Flowery has since grown from a small-scale operation where Osman herself delivered medical marijuana to customers, to an outfit run by some of the industry’s most prominent marijuana executives. None of that has changed the spirit of the business, says Garrison, who at 77 still visits the facility almost daily; his three surviving children and two grandchildren are active in the daily operations of the Flowery.

“Everybody sold out to the Canadians,” says Garrison new times, referring to the number of Canadian-based companies that have obtained medical marijuana licenses in Florida. “We got offers, but it would be terribly hypocritical if we took the money and ran. We said we were doing this because it’s the right thing to do and to help people. We took on investors because that we have no choice – DOH burdens [Florida Department of Health] puts on you are serious. We’ve been bleeding money for the last six or seven years. Ultimately it will be a lucrative operation, but we are proud to be able to ease the pain and suffering.”

Asked about the prospect of becoming the next Trulieve or Curaleaf, Flowery’s managing director, Elad Kohen, exclaims “Hell no! We’re doing everything we can to be the exact opposite.”

The Flowery is on track to open its first brick-and-mortar dispensary in June, in a converted bank in the middle of what Smuts calls Miami’s “Green Mile” on Biscayne Boulevard – a stretch between NE 105th and NE 125th in North Miami which has a number of medical marijuana dispensaries. An “Opening Soon” banner is draped over the entrance doors to the store, located across from the popular Steve’s Pizza restaurant. Smuts says the company intends to convert the old bank’s drive-thru ATM lanes to a drive-thru order-and-pick-up service.

Medical patients with a Florida medical marijuana card can expect a “high-end” experience at the dispensary, which will be decked out in colorful neon lights. The store will have a garden, a large claw machine, self-ordering kiosks, and even a speakeasy-like experience where customers can enter through a secret door in a phone booth to find “hidden goods.” Weed offerings, such as flowers and kief, will be displayed on wooden tables and presented on plasma TV screens.

“I don’t know if you’ve ever been to a Surterra or something,” Marshak says, referring to the sanitized, fluorescent vibe of the rival chain’s dispensaries. “But think exactly the opposite.”

“We got offers, but it would be terribly hypocritical if we took the money and ran away.”

Over the next two years, the Flowery plans to open at least four additional dispensaries across Florida, in Inverness, Clearwater, Ocala and Venice. The company is also working on a partnership with West Coast cannabis brands such as 710 LABS, Backpack Boyz and Packwoods.

Despite the accelerated growth, Flowery’s leaders are keen to stay true to their roots. Smuts goes so far as to compare the Flowery company to David in the biblical tale of David and Goliath, noting that they are already far from industry underdogs.

The mindset, he says, has always prioritized quality over quantity, and they continue to work to create better flowers, new flavors, and to add products like edibles and meat to their menu. solvent-free hash.

When asked what will differentiate the Flowery from its competitors, he doesn’t hesitate.

“Our product will speak for itself,” he says. “The pot will be different.”