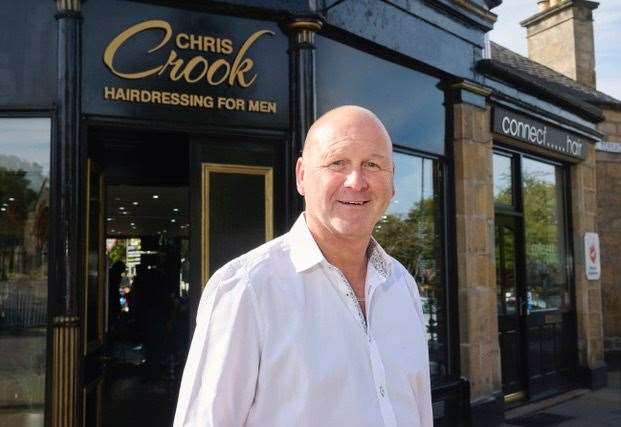 A well-known Inverness barber puts down his comb and scissors to cut a strip across the Grand Canyon for cancer charity.

Chris Crook, who has been a hairdressing mainstay in the city for 45 years, will tackle on foot more than 40 miles of the famous gorge and nearby Zion Canyon to raise money for Marie Curie.

Along with the rocky Red Gorge and dizzying terrain of Arizona, Mr. Crook and the other participants will endure scorching desert temperatures on the guided hike after flying to Las Vegas.

He is motivated by the memory of a number of clients, friends and family members who have battled cancer, some of whom have lost their lives, and was particularly keen to raise funds to support research on potential future treatments.

The week-long trip will include five days of hiking and camping, including one particularly spectacular day over the mighty Colorado River.

Mr Crook, who flew to the US from London on Sunday before starting the journey today (Monday September 12), has already raised more than £2,700.

“It will be tough, with each day being filled with six to eight hours of walking over rough terrain in around 37 degree heat and sleeping under the stars,” he said.

“I am thrilled and extremely grateful to everyone who has donated so far.”

Mr Crook began his hairdressing career in 1977 in Castle Street, mentored by his brother Ralph.

To date, he has done over 100,000 haircuts for clients including MPs, lords and actors, including an unnamed French film star who summoned him to Ledgowan Lodge in Achnasheen to cut his hair before d to host the French equivalent of the BBC’s Top Gear show.

The hairdresser is renowned for its continuity in staffing with its loyal team of four – Kathleen, Della, Eva and Gaile – having worked at Chris Crooks for 87 years.

In 1991 Mr Crooks moved barbers to the Crown area and established Connect Ladies Hairdressing in 2008, run by his daughter Meaghan and Suzanne Ewing.

Mr Crook, who is a veteran of past marathons and other charity events, added: ‘I am a proud Highlander and have loved watching Inverness grow over the years.

“I have an amazing team and I’ve been privileged to have so many amazing clients, many of whom have become great friends.

“We have a great community here in the Highlands and I’m proud to have built my business around it and now donating something to support a charity close to my heart.”

Donations can be made to

With more event information available at: