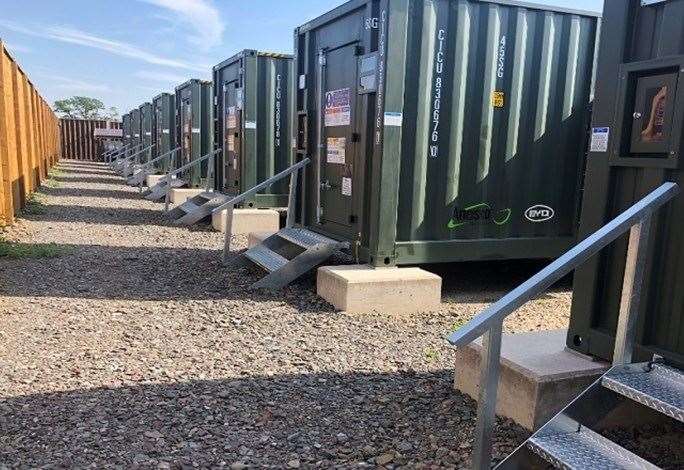 Council recently agreed to oppose the plan because of its proximity to housing.

At the meeting, secretary Veronica McKinnon said: “Initially they wanted to put it on the ground which is now the new Showfield. Now (the proposed site) it stands opposite Househill Court.

Chairman Hamish Bain said: ‘I think this may not be the right place. The council at one point thought it was too close to the accommodation.

He said plans had been approved for similar storage facilities at Blackpark (farm) which he thought would be preferable as it was not near the accommodation.

Since the meeting, news has emerged of a new request for another battery storage facility at nearby Blackpark Farm.

Mr Bain said a location (in Blackpark) near the Grigorhill industrial estate would be more suitable.

Planners have welcomed news that the access gate has been moved back 15m from the A939, which will allow entry to ‘industry access standards’.

There are no other objections to Househill’s proposals. Whirlwind Energy Storage Ltd’s application is for the construction and operation of a battery energy storage facility comprising up to 50 containerized battery storage units, auxiliary transformers and inverters, a connection building, an office and an on-site store, fencing and landscaping.

The site is arable land 250 meters from Househill House and the purpose of the project is to import and store electricity from the power grid in the event of excess production (wind farms) and then export it again in the event of potential deficit. .

The app states: “This ‘Grid Balancing Service’ helps ensure decarbonization as it effectively reduces the degree to which renewable energy generation needs to be ‘trimmed’ (turned off) by helping to store excess generation.”

It adds: “Energy projects of the type proposed here can only be located where they can be connected to the electricity grid at points that have the capacity to import and export electricity.”

The Househill project has secured such a connection point via the Nairn substation, 650m to the northeast. The project would be connected to the substation via an underground cable.

The claimants added that the land is owned by Margaret and Gordon Nicolson, who have farmed the area for 36 years. Househill Mains is a 300 acre mixed beef and arable farm.

“The family have also developed Househill Courtyard on the original farm which includes a farm shop, cafe and furniture store.

“Margaret and Gordon are strong supporters of green projects, sustainability and the march to net zero and this energy storage project is an opportunity to diversify their business.”

A Notice of Demand (PAN) proposal has now been submitted to Highland Council on behalf of Anesco Limited for a development on land at Blackpark Farm.

An online consultation event will take place from November 23, 2022 to December 14, 2022 on a dedicated website. Exhibit material, detailing the proposed development, will be uploaded for viewing on the website. It will also have live chat facilities on November 23, 2022 between 12:00 p.m. and 7:00 p.m. to allow the public to ask the project team direct questions about the proposed development.